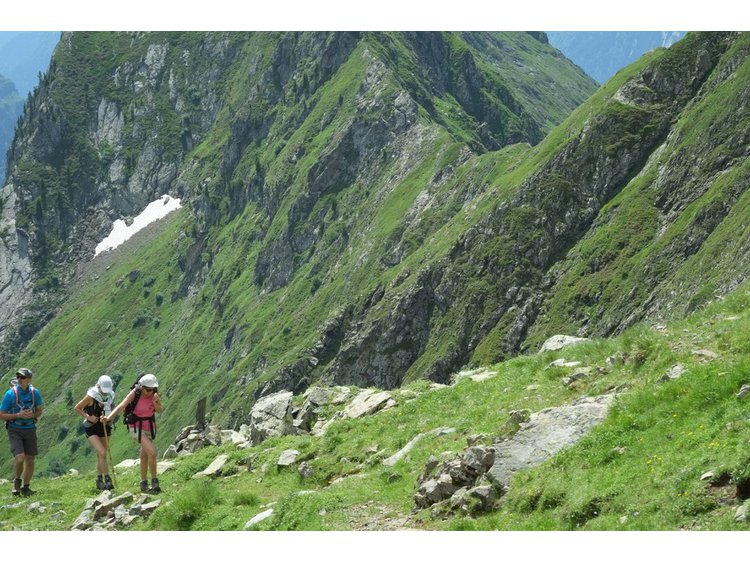 Trails cut out of the rocky land, a pristine narrow valley: a variety of landscapes up to the summit with unforgettable views over the Ecrins, the Dévoluy and the Vercors.

Itinerary :
Join the Péchal from the parking lot in the village center via Siguret.
From the sign (840m) indicating the Tête de l'Aiguille, take the path that goes straight up and enters the Combe de la Grande Dreyre to the north. This path goes up in the forest on the right bank of the stream. At around 1150m it changes banks, departs from the stream and winds its way up to an altitude of 1500m (sign) indicating the Cabane de la Drayre at 0.9km and the Col de la Pierre Luminet.

Cross the stream and reach the hut a little higher and then a crossroads (sign marked Cabane de la Drayre) at an altitude of 1660m. Take the path on the right towards the Col de La Pierre Luminet which continues in the forest and comes out after a few switchbacks around 1900m.

From there, we find ourselves in the open on the winding path overlooking Les Fontanelles, under the Pierre Luminet pass. Continue the uncovered climb to the north in several switchbacks which become tighter and end in a balcony as you approach the Pierre Luminet pass which allows you to cross the Rochers du Barrioz.

After a short passage on the balcony on the path cut into the rock, you overlook the Vallon de l'Infernet and the Combe de la Pisse and you reach a stone building at 2239m (sign marked La Pierre Luminet). Then continue the ascent to the top of the valley via wide switchbacks, where the path is consolidated and joins a sort of small pass between the rocks which leads to the ridge from the 2545m level.

Continue to the right on the GR, along a path cut into the side of the rocks on the slope overlooking Les Fonds de Plaines until the Coiro pass which lets us discover the nearby Coiro summit. From the pass, go up west in the scree under the rocks, to reach a small corridor that we go up easily, and which brings us to the south side. From there, find good holds to the right to complete the ascent to the top of Coiro.
Return : identical to the outward journey.